The Zone of Proximal Development (ZPD) is defined as the gap between what a learner has already mastered (the actual level of development) and what he or she can achieve when provided with educational support (potential development).

In order to determine if a student is working within their ZPD, teachers must continually assess student progress.  Informed teachers can guide students away from easy tasks towards more challenging tasks. To accomplish this, they scaffold their students’ learning.  When the correct scaffolds are in place, students are then presented with just the right amount of challenge creating a situation that encourages them to apply their knowledge to a slightly more complicated task.

To delve into the

topic of scaffolding, I present an interview with a former colleague of mine, Chris Depew. He’ll describe his initial lesson which is followed by a practice activity.  While his class progresses through the activity, you’ll see how his scaffolding choices empowered two 4th grade students.  As their understanding of multiplication grew stronger, they became leaders in their class which sparked a personal sense of confidence and pride.

JGV:  Chris, would you describe the lesson you taught the day before your students completed the Round the Room Activity.

CKD:  The day before, we multiplied double digit numbers by single digit numbers using the Number Disk Multiplication Method.  It was the introduction. This method requires them to draw dots into boxes. We also worked on re 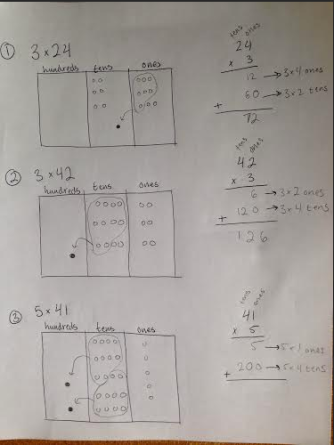 cording the individual multiplication. The products were represented with the arrows, so that we knew what to draw inside the box. It served as a way to double check because a picture proves an answer. We can multiply and get an answer. If we also draw a picture to represent our work and the two match up, then the product must be correct.

We would always explain why we wrote the arrows to the side. The 4 • 3 ones shows us that we need to have 4 groups of 3 in the ones box. There was a lot of repeat after me that day.

We mostly worked as a whole class to understand that this process was different than what we were used to.

JGV:  Explain why this method is different.

CKD:  We wanted to break it down. Rather than looking at it as 24 • 3 (in problem 1), it was really 3 • 4 ones and 3 • 2 tens. The words reminded us which place value column we were working in so we could include the zero for when we calculated 3 • 2 tens.  The arrows made us remember the grouping strategy, so we knew what to enter in the boxes. The dots in the boxes needed to match our multiplication answer.

CKD:  I picked specific numbers in order to have one column that needed to transfer over or regroup.  For 3 • 4 = 12, you would need to take a group of 10 and move it into the tens box and represent it as one dot.

JGV:  Explain what you mean by, “Repeat after me”.

CKD:  Repeat after me happened a lot during the lesson. I would show an example and say aloud my steps. As I did a step, the class would repeat it back to me. It was a way of reinforcing the steps in addition to completing their paper work.  The students could see the connection between the boxes and the multiplication.  By saying the steps aloud, I was preparing them to work on their own for the Round the Room Activity. The repetition helped them remember which steps to do and why.

JGV:  Would you describe your activity?

CKD:  The activity consisted of 6 multiplication problems posted around the room. They also had them written on their worksheet, but the goal was for them to travel around the room to find the problems and work on them with kids who were already there. Two sets of problems were posted. This was done to have fewer students at one problem – to make sure discussions were actually happening.

We hadn’t worked with multiplying with three digit numbers yet, and two problems had them in it. (See picture – problems 5 and 6)

JGV:  Why did you include those two problems?

CKD:  I decided to include those problems as a challenge – to survey where the students were at. Going back to your Mindset map, I wanted to see if kids gave up or if they would struggle with it like a puzzle until they knew they were correct. Turns out majority of the kids tried it -which shocked me. They took the challenge. They used their previous knowledge and recognized the pattern. By working with their classmates, kids were able to think of solutions together.

JGV:  Even though the problems were also on their worksheet, did most kids move around?

CKD: Yes, every kid moved around.

JGV: Did students work with the same kids or did you notice kids changing partners depending on the problem?

CKD:  Each kid worked at their own pace. Some worked with others who were at the problem, some stayed with a partner the whole time as they moved, and others just worked on it by themselves and either asked the occasional question or provided help to those who needed it.

JGV:  Did students see others at a problem and go up and ask them a question or check in with them?

CKD:  Yes, I was constantly monitoring around the room.  I saw students who did go to a problem where other students were working.  They felt more comfortable asking those kids for help. There were a couple of students who sought out one particular kid when they saw the next problem they needed to do.

Part 3 – The Power of Scaffolding

JGV:  Describe the student discourse that was happening.

CKD:  I heard a lot of students talking about the two challenge problems.  They were asking “well, what would happen if you just keep multiplying?” They were confused at first but due to their understanding of the pattern, they were willing to try.

Two girls reached the challenge problems first.  They came up and asked me what should they do with the 3rd digit. I responded with, ” Does it have the same pattern?” and “What do you think you should do?” The girls went back to work right away on the last bit of the problem and then came over to verify their answer. Instead of saying they were correct, I asked them if their picture matched their answer… which it did. The two girls were very proud!  I was a very happy teacher 🙂

I then used those two girls as “the pros”.  I instructed the girls to ask anyone, who was struggling with 5 and 6, the same questions I asked them.

JGV:  How did the girls figure out how to complete the challenge q

CKD:  The girls said they were able to figure it out because the 3rd arrow helped them follow the same pattern as before. To them, it made sense to keep the pattern going.

CKD:  They said it “felt awesome helping others”. It gave them ownership and they felt proud to be the first two to get it. They thought it was “really cool”.

JGV:  What did you observe while the girls were helping their classmates?

CKD:  It was super neat to see how hard the whole class was working. These problems also gave the students a preview of what was to come. It served as a great lead in and topic transition.

The process was something that the kids were used to doing. They knew the pattern, so multiplying with more digits wasn’t that much of a difference. They just added in zeros by the arrow in order to keep the place value in which they were working. I think the enforcement of the multiplication process as a class and individually, the day before, prepared them to multiply a single digit by a 3-digit.  It just came naturally because the process had a clear structure. A pattern was built and they just assumed to keep the pattern and structure going for something that looked a little foreign.

JGV:  Would you describe what happened the next day?

CKD: The next two days those two girls totally owned the multiplication sections. They are both mid level achievers, so it gave them a lot to be proud about! It gave them the sense of ownership. Over the next couple of days, there were times where we had to refer back to our pros and the rest of the kids started to get the hang of it because it was “Fiona” and “Kristina’s” work.

As I was searching the internet for graphics to insert in this blog, I came across this one. Interestingly, the steps listed are almost identical to Chris’ process.

1.  As Chris modeled the multiplication strategy, not only did he “think out loud” but he also required his students to verbalize the steps out loud.

2.  Number Disk Multiplication provided two different methods of showing the multiplication process – a concrete visual with the place value boxes and version of the traditional algorithm off to the side. With this, he established a clear pattern and structure for students to follow.

3.  Although, he didn’t specifically pair advanced learners with developing ones, the structure of the Round the Room Activity allowed students the freedom to work with others.

4.  Once Faith and Kristina understood how to complete the two challenge problems, he encouraged them to be the teachers therefore minimizing his role or fading into the background.