Throughout the day a few conversations and observations stood out.

As I approached one group, I hear lots of discussion, debating really.  In an attempt to settle the debate, Xavier grabs the pencils and said, “Let’s play with the numbers!” He wanted to show his group how to experiment with the pencils (the given manipulative)

Xavier’s comment was music to my ears! Manipulatives give students a chance to play with the math.  For many students, the tangible object clarifies the concept therefore building a deeper understanding of the math.

Students require opportunities to strengthen their spacial visualization skills.  One group was absolutely convinced that the 3 pencils (6, 7 & 8in length) would not form a triangle.  I recreated their first attempt (bottom left) for I didn’t take a picture at the time. I suggested to move the pencils. 3 students removed the pencils and then slid them back into the same spot:).

Surprisingly, this scenario happened multiple times.  I responded in a few ways:

Once comfortable manipulating the pencils, student effortlessly worked through the task.

Example 4:  When the rule gets in the way 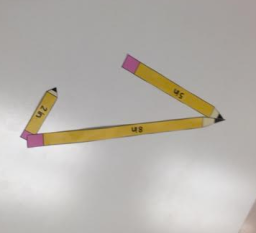 In this situation, the teacher had been out for several days due to a medical need. Because of the rotating substitute teachers, assessing student understanding was necessary before moving on.  I knew Barry’s background therefore not surprised that he knew the rule. I wanted him to apply that rule to the given picture.

By moving fluidly between the abstract (rule) and the concrete (visual), I strive to strengthen flexible thinking within my students.  Here are  2 conversations designed to illustrate my point.

Example (not an actual conversation) 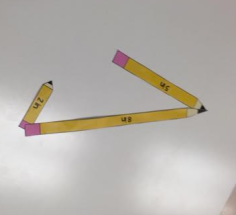 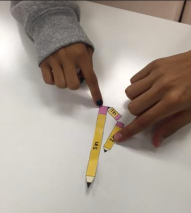 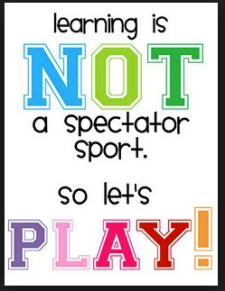 Throughout the exploration, which lasted roughly 12 minutes,  I found myself observing groups who were completely engaged.  Although the activity was structured in a cooperative group format, where all students had an integral role within the task, there was at least one student per group who relied on moving the pencils to further their understanding.  For others, their eyes were glued to the picture.  Seeing is believing and the examples of triangles and non-triangles formed a lasting reference.

I’ve always been a tactile/kinesthetic learner.  Still am. I learn best when I’m actively involved in the process.  I would have been the student who relied on manipulating the pencils to see the answer.  When students are playing with manipulatives, they are learning.  In many instances, students are learning more than expected and these unintended yet beneficial connections develop a student’s capacity to understand mathematics.